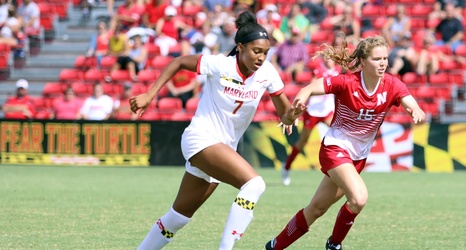 Maryland women’s soccer forward Mikayla Dayes outmaneuvered a Georgia Southern defender and sprinted towards the goal. Another defender tugged on her jersey, but Dayes wouldn’t be stopped from giving the Terps a go-ahead goal.

She fought off the coverage, kicking the ball into the left side of the net for the score to put Maryland up 2-1. After some delay for lightning, the Terps held on to start the season in the win column.

The Terps outshot the Eagles 20 to four in the victory, only allowing one shot on goal to eight of their own. Forwards Alyssa Poarch and Dayes, who were both named Big Ten Players to Watch, scored the two goals for Maryland.