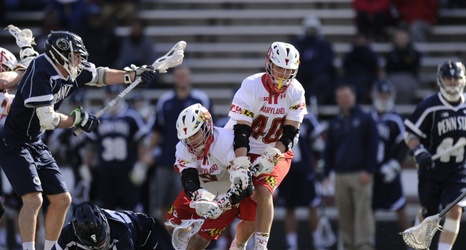 This Sunday'smatchup at Penn State (7 p.m., Big Ten Network) has quietly grown into one Maryland's' biggest of this men's lacrosse season. After starting the season unranked, the Nittany Lions have since compiled an impressive 7-3 resume and climbed to No. 14 in the collegiate rankings.

When defending national champion Denver was undefeated on the season and the unanimous top-ranked program, it was Penn State who played spoiler by throttling the Pioneers 15-10 on a neutral site. It has staked wins over Harvard in overtime, as well as Big Ten foe Ohio State just last week.

Just his second year coaching in the Big Ten, head coach Jeff Tambroni is getting the most out of a resilient Penn State team that seems hungry to stake a claim in this year's' competitive Big Ten Conference.