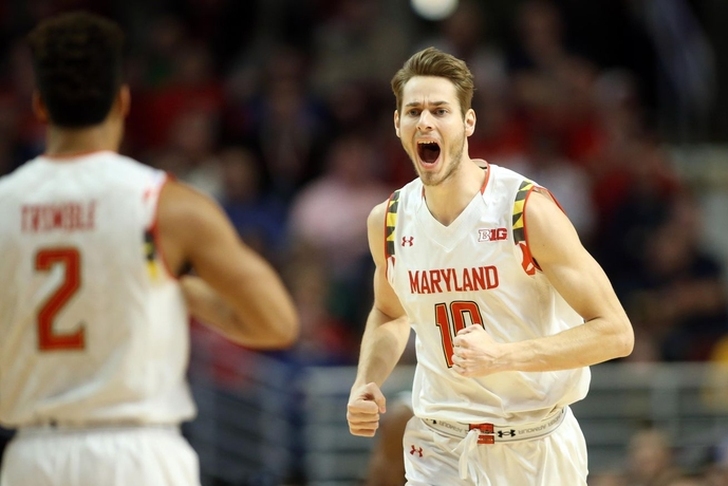 The Maryland Terrapins were looking to put all the pieces together after an inconsistent regular season. They weren't able to do that, but they did advance by holding off a furious late run by South Dakota State run to win 79-74, thanks in large part to their 51.2 percent shooting.

Melo Trimble seemed to break out his slump for Maryland, scoring 19 points. However, the best performance of the night came from Jake Layman, who scored 27 points to go along with three rebounds. Jared Nickens also chipped in with 14 points off the bench.

The Terps got control of the game in the first half, closing the opening from on a 24-12 run to take a 34-22 lead into halftime. Maryland's lead ballooned to 18 on several occasions in the second half, yet South Dakota State would not go quietly into the night, cutting the lead to five with 3:00 remaining.

Maryland was able to keep SDSU at arm's length until there was 1:03 left when Trimble picked up his fifth foul. George Marshall hit all three free throws that came as a result, cutting the deficit to two. That was as close as South Dakota State would get.

Layman drained four free throws and Jaylen Brantley added another down the stretch, giving Maryland a 77-74 lead with 12 seconds left. South Dakota State turned the ball over on the ensuing possession, perserving the win for the Terps.

The Jackrabbits were led by 19 points from senior guard Deondre Parks, though 16 points from Mike Daum also played a major factor for them.

Maryland now advances to the second round where they will face (13) Hawaii on Sunday afternoon.