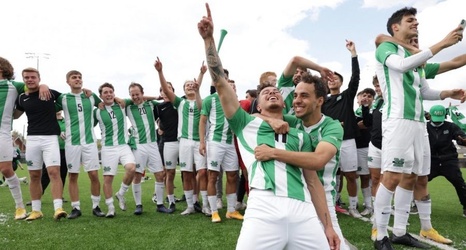 In front of a sellout crowd at Hoops Family Field, the No. 9 Marshall men’s soccer team defeated No. 12 Charlotte Sunday, capturing the 2020 Conference USA title and an automatic bid to the NCAA tournament.

Going into the contest, Marshall had to win in order to secure the C-USA championship while Charlotte only needed a tie.

Playing to Charlotte’s favor, the game was scoreless in the first half, as both team’s defenses thwarted goal opportunities.

The theme continued through the early part of the second half, but in the 63rd minute, disaster struck the 49ers when a handball was called in the box, setting up a penalty kick for junior right back Jan-Erik Leinhos.