Marquette falls to Creighton in the BIG EAST Championship game 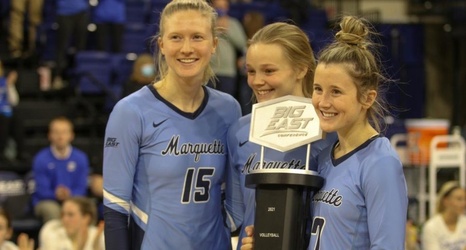 For the fourth time in the last five years, Marquette volleyball hoisted the BIG EAST Runner-Up trophy as the Golden Eagles fell to the Creighton Blue Jays in straight sets (20-25, 22-25, 20-25) Saturday’s conference championship game at the Al McGuire Center.

“I thought a really good defensive effort by both teams,” Marquette head coach Ryan Theis said. “I was really proud of the way we defended throughout. There was some really good efforts. We just needed to be a little sharper on offense, can’t feed their block that much.”

It is the third time this season that Golden Eagles fell to the Blue Jays this season.