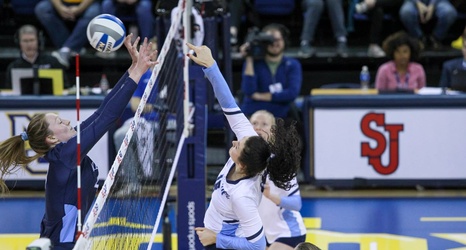 Thanks to a powerful 16 kill performance from outside hitter Allie Barber, YOUR Marquette knocked off Villanova on Saturday afternoon in the Big East tournament semifinals. The Golden Eagles won with set scores of 25-22, 25-18, and 25-19, winning in a sweep, 3-0, and advancing to the tournament title game on Saturday afternoon.

As could be expected from Josh Steinbach’s team, Villanova gave Marquette a good run for their money. Between the fact that the Wildcats finished third in the Big East and the fact that VU was playing with their season on the line as they have no shot at an NCAA tournament at-large bid, it’s not surprising that all three sets were competitive even if the scores might not tell you that was the case.