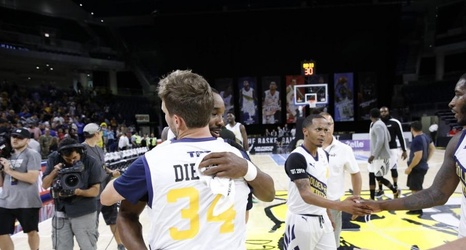 Related Topics: Travis Diener, The Basketball Tournament, Maurice Acker, And I was like

Travis Diener, 37, didn’t know if he’d be playing in the The Basketball Tournament after not playing the first few games in Wichita.

“I didn’t know I was (going to be) playing. Last Wednesday, I was with Maurice Acker and Joe (Chapman), and they were like, ‘Are you trying to come back and play?’ And I was like, ‘I’d love to play, and I’d love to be a part of (the team),” Diener said. “That night, Twitter was blowing up saying I was playing, so I texted Joe (Chapman) and said, ‘So I guess I’m playing?”

That decision made a big impact Sunday, as the 37-year-old hit the game-winning three in the Elam Ending to secure a 68-62 win over Team Hines send Golden Eagles Alumni to the TBT championship for the first time.