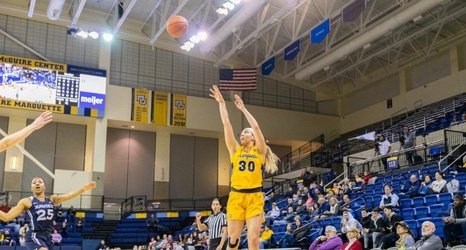 Despite the absence of star junior guard Selena Lott in the lineup, Marquette women’s basketball overpowered the Xavier Musketeers Friday, securing a 61-48victory.

Marquette is now in sole possession of second place in the BIG EAST, and have a chance to put distance between themselves and third-place Butler on Sunday.

Even though MU got out to a slow start in the first and third quarters, the Golden Eagles rallied back and maintained their undefeated home record in conference play. Here’s a breakdown of Marquette’s win:

Senior guard Isabelle Spingola had an impressive game in Lott’s absence, putting up a game-high 21 points on the night.