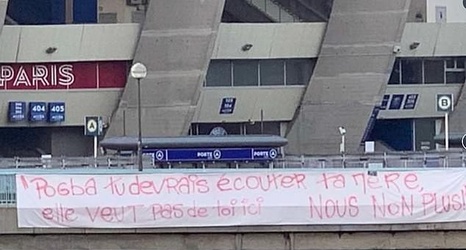 Supporters of Paris Saint-Germain have made it clear Paul Pogba won't be welcome at their club amid speculation the Manchester United midfielder could be on his way there.

One set of fans have hung banners outside the Parc des Princes and PSG's training ground to protest against his potential signing.

The banners, which appeared on Saturday morning, read: 'Pogba, you should listen to your mother. She doesn't want you here, neither do we.'

Nobody has claimed responsibility for the protest banners as yet, according to RMC Sport.