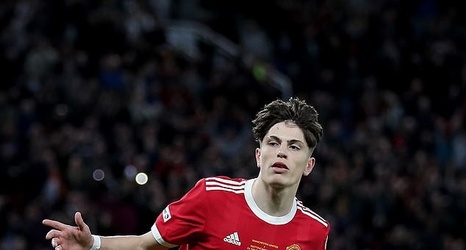 Manchester United's new darling Alejandro Garnacho was serenaded with a famous chant by the Red Devils' faithful after his display clinched the FA Youth Cup on Wednesday against Nottingham Forest.

The Spanish-born Argentinian youth international scored twice late on in the second half to clinch the famous u-18's trophy for a record 11th time for the Manchester club.

His 78th minute penalty, controversially awarded after his appeared the forward had actually been brought down outside the area, proved the difference between the sides.

Following the game, which was attended by over 67,000, a record for the competition, United's youth players celebrated wildly on the pitch in front of an adoring crowd.