Sir Alex Ferguson scoops stunning TREBLE on the opening day of the Grand National meeting as Protektorat, Monmiral and Clan des Obeaux win... and the legendary boss was one of the lucky ones to be allowed to attend! 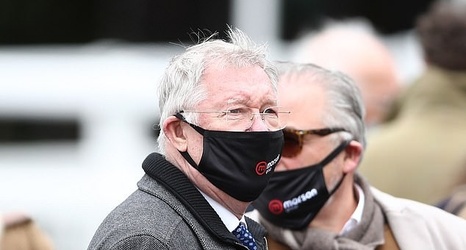 Sir Alex Ferguson always loved a win on Merseyside as Manchester United manager and he was celebrating a brilliant Treble as the Grand National meet got underway at Aintree on Thursday.

The legendary manager is the owner of Protektorat, who won the Grade One SSS Super Alloys Manifesto Novices' Chase, and also Monmiral, the favourite who won the Doom Bar Anniversary Juvenile Hurdle.

And the man who led United to their famous Treble in 1999 earned another when Clan des Obeaux romped home to win the Betway Bowl Chase.

Ferguson was one of the lucky ones allowed to attend the opening day of the Aintree meet amid tight Covid-19 restrictions and he was soon celebrating.