Paul Scholes IS right to compare Marcus Rashford's finishing with Ruud van Nistelrooy... Manchester United's goalscoring star is a long way ahead of where the Dutchman was aged 22 after his hat-trick against Leipzig 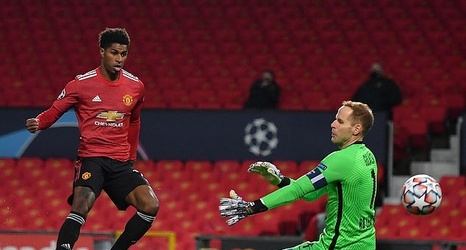 Paul Scholes has a point. When you watch Marcus Rashford scoring for Manchester United, there are definitely shades of Ruud van Nistelrooy.

Look at the first of his three against RB Leipzig on Wednesday night. The burst of acceleration to leave the defenders for dead, the little nudge of the ball to outfox the goalkeeper then the opening up of the body to find the bottom corner.

Assured, clinical, absolutely no doubt as to where the ball is going to end up.

The finish brought to mind Van Nistelrooy scoring the second goal of one of his own United hat-tricks, also at the Stretford End, against Fulham in March 2003.