Ole Gunnar Solskjaer offers Donny van de Beek Man United lifeline as he admits Holland duty has 'done him the world of good'... before claiming midfield flop has 'scored some absolute crackers' in training ahead of Brighton clash 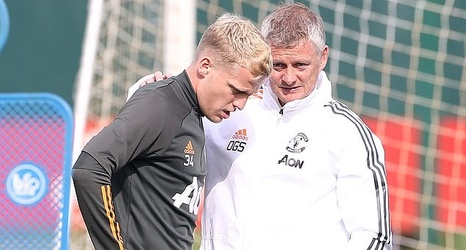 The United boss revealed the Dutch midfielder has scored some 'crackers' in training, after hitting the back of the net for Holland in the 7-0 demolition of Gibraltar.

And he is hopeful that the 23-year-old can kick-start his career at Old Trafford in the final games of the season, after a lacklustre start to life in England.

'Donny scored some absolute crackers when we were all back in training on Friday' said Solskjaer.