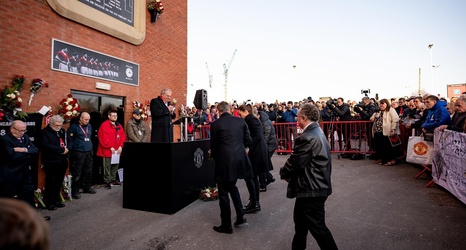 Solskjaer and Stoney joined former United captain Bryan Robson in laying a wreath, as the Reds marked the anniversary of the air disaster that claimed 23 lives in 1958.

“It’s a dark day in our history and we’ll always remember the ones who sadly passed away in the accident and what it did to the club,” Solskjaer told us.

“Of course these days are very important for us.”

Also present at the event was Jimmy Murphy Jnr, who recalled how his father helped to rebuild United in his role as Matt Busby's assistant.

Songs were sung and poems read out in front of the Munich plaque in the south-east corner of the Old Trafford forecourt, before the congregation observed a two-minute silence at 15:04 GMT, the exact time the plane crashed on 6 February 1958.