'Oh f***, Roy Keane is here!' Gerard Pique tells Gary Neville about his run-in with then-Manchester United captain when he was a 17-year-old at Old Trafford... which left him scared of the Irishman seven YEARS later 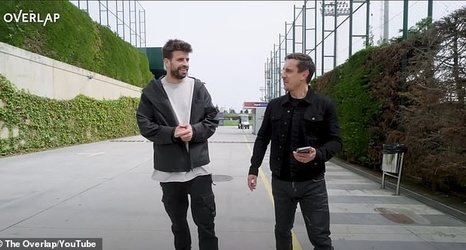 Gerard Pique has recalled a hilarious anecdote about a run-in with Roy Keane when he was a 17-year-old at Manchester United.

Now 35, the Barcelona icon spent four years at Old Trafford when he was a youngster, when infamously intimidating Keane was Red Devils captain.

Speaking on Gary Neville’s The Overlap YouTube channel, Pique told the United legend the Irishman once exploded at him because his phone went off in the dressing room - so angrily he was a little scared when meeting Keane seven years later.

He said: 'We all know Roy, but when you're 17 you look at Roy differently.