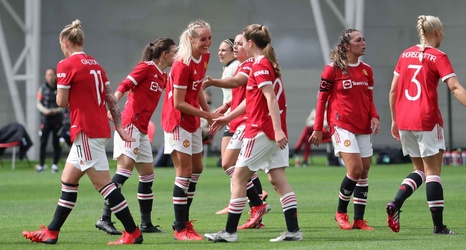 The former Birmingham City and Orlando Pride manager took over as United Women's head coach at the end of July and after working with the players for a few days, got a chance to see them in action at our training ground this weekend.

As well as Skinner, there were debuts for new signings Hannah Blundell, Aoife Mannion, Vilde Boe Risa, Sophie Baggaley and Martha Thomas as well as a number of younger players.

United dominated the early proceedings at Carrington, with Boe Risa winning a free-kick after a mere 50 seconds, from which a deep cross flashed past the far post.