Manchester United star Cristiano Ronaldo shocks local residents by signing up to an exclusive £255-a-month gym in Cheshire... with the Portuguese spotted working out at the facility with his family 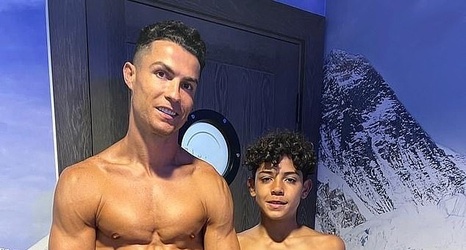 Manchester United star Cristiano Ronaldo has made the rare move of joining a local gym as he stunned fellow Cheshire residents by signing up to an exclusive £255-a-month facility in Knustford.

Ronaldo, 37, has been seen working out at the Cpase health club, located in an area popular with Premier League footballers, most days this week.

The Portuguese is using these sessions in addition to training at Carrington with United and at his own private gym.

Ronaldo this week posted a picture with his son Cristiano junior in the gym’s cryotherapy chamber.