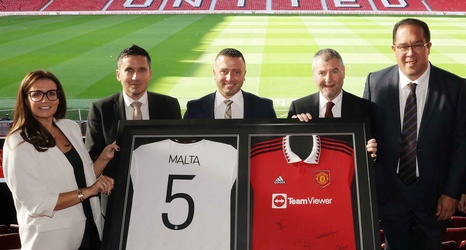 In attendance were Hon Clayton Bartolo, Minister for Tourism, Mr Anthony Gatt, Permanent Secretary within the Ministry for Tourism, and Mr Carlo Micallef, CEO of the MTA.

The ceremonial event marked the renewal of the fruitful partnership between Manchester United and VisitMalta, which promotes Malta as a tourist destination to 1.1 billion followers worldwide.

The collaboration provides the VisitMalta brand with strong exposure during the Reds' home fixtures and through our official social and digital platforms.

Minister for Tourism, Clayton Bartolo, praised the extension: "Reaffirming VisitMalta as the Official Destination Partner of Manchester United will lead to an increase in visibility and marketing coordination on an unprecedented level for the Maltese Islands not just in Europe but in other long-haul markets such as America, Asia and the Middle East.