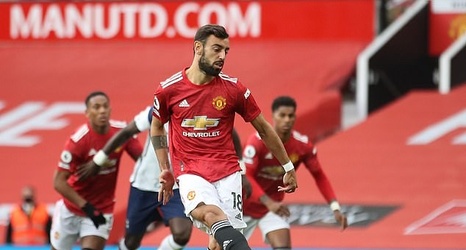 Jose Mourinho has claimed he will resist the temptation to discuss Manchester United's prolific threat from the penalty spot with his Tottenham players.

United travel to face Spurs on Sunday having been awarded nine penalties in 30 Premier League games this season, scoring eight. Only Leicester have been awarded more, 10.

Bruno Fernandes scored his 11th penalty of the season in all competitions as Ole Gunnar Solskjaer's team won 2-0 at Granada in the first leg of their Europa League quarter final on Thursday.

'I cannot go to a football match concerned, I can't,' said Spurs boss Mourinho when asked about United's penalty threat.