'In order to compare them with others, we need to win': Inter Milan boss Antonio Conte insists Romelu Lukaku and Lauturo Martinez still have room for improvement... after Belgian's agent labelled him 'the best striker in the world' 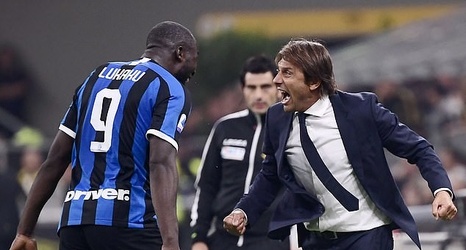 Antonio Conte has laid down the gauntlet for the in-form Romeli Lukaku, insisting he needs even more from his star striker in order for him to one day be considering one of the greats.

Lukaku enjoyed one of the most successful debut seasons ever in European football during the last campaign in which he swapped Manchester United for Inter Milan, scoring 34 goals in all competitions to become the first Inter star to do so in a maiden season since Ronaldo.

Beginning this campaign in sizzling form Lukaku has six goals in seven games - leading his agent to label him the best striker on the planet right now - but Conte is still in search of more.