'I choose Lewandowski': Bayern Munich star picks HIMSELF when asked to choose between Lionel Messi and Cristiano Ronaldo as striker hints he should have won the Ballon d'Or this year after scoring 69 goals in 2021 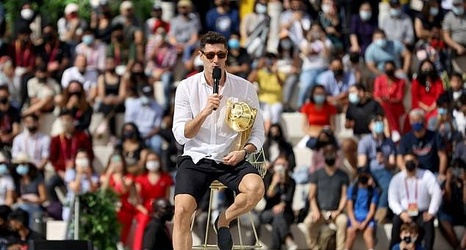 Robert Lewandowski has intimated that he believes he is the best player in the world after being snubbed for the Ballon d'Or for a second-consecutive year.

Lewandowski has enjoyed another stunning 12 months for Bayern Munich and Poland - plundering 69 goals in total for club and country.

But despite the wonderful feat, which saw him win the Bundesliga and German Cup in 2021, the striker was overlooked for the coveted gong - which was controversially won by Lionel Messi for record-breaking seventh time.

During his illustrious career, Lewandowski has now seen Messi (seven times) and Cristiano Ronaldo (five times) be named the best footballer in the world.