How's that for job security? Cristiano Ronaldo is closely followed by mystery bodyguards as the Manchester United superstar makes his way to training in his Bentley 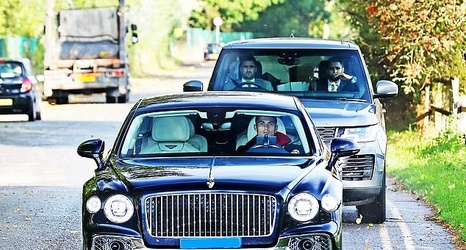 Cristiano Ronaldo has got used to being man-marked over the years – and now the Portuguese forward has taken the meaning to a new level off the pitch.

As the 36-year-old made his way to training on Thursday morning, Ronaldo was seen driving his plush Bentley to Carrington with his two personal bodyguards following very closely behind.

It comes the morning after United were dumped out of the Carabao Cup, with Bruno Fernandes and Co falling to a 1-0 defeat by West Ham.

Ole Gunnar Solskjaer's side could have done with the added protection at the back against West Ham, with Manuel Lanzini scoring a ninth-minute winner to send the Red Devils crashing out.