Former England manager Sven Goran Eriksson brands Gary Neville as a 'professional MOANER'... claiming he was given a warning by David Beckham over the former right-back's negativity during a Three Lions training session 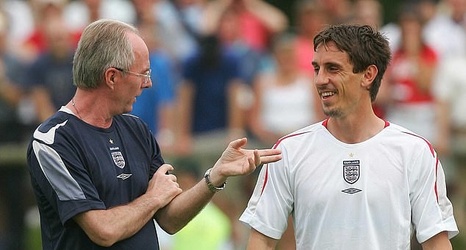 Sven Goran Eriksson has called Gary Neville a 'professional moaner' and that he had to be warned by David Beckham what to expect from the former full-back shortly after becoming England manager.

Eriksson was appointed as England boss in 2001 during a period when Neville and Beckham were international team-mates as well as Manchester United stars having come through the fabled 'class of 92.'

But while Neville was one of the stand-out full-backs of his generation, winning 85 caps between 1995 and 2007, his perceived negativity is remembered with light fondness by his former international boss.