Fans invade the pitch and takes selfies with Manchester United star Bruno Fernandes during Portugal's World Cup qualifier in Azerbaijan... then one takes a photo with the referee as security fail to intervene 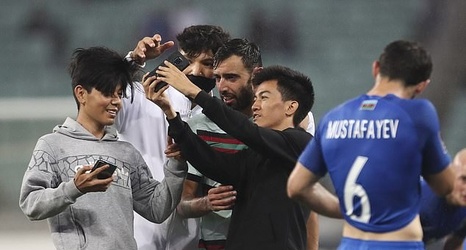 Manchester United star Bruno Fernandes was mobbed by four fans for a selfie during Portugal’s 3-0 win over Azerbaijan.

The World Cup qualifier was held up for a few minutes as the youngsters took turns to pose for a photo with the midfielder.

Fernandes was understandably a little shocked that local security failed to respond to the pitch invasion in the 87th minute of Tuesday's match in Baku.

One fan then grabbed a photo with the referee before returning to the stands and allowing the game to restart.