Denis Law unveils a statue of himself in Aberdeen alongside Sir Alex Ferguson, as legendary manager labels the former Manchester United star as the 'greatest Scots player of all time' 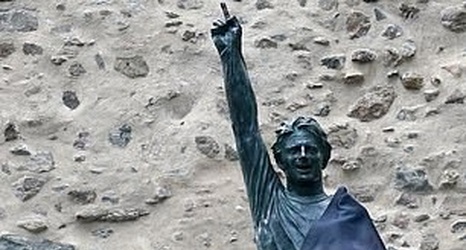 Former Manchester United and Scotland footballer Denis Law has unveiled a bronze statue of himself in Aberdeen.

Sharing a stage with Sir Alex Ferguson and Aberdeen Lord Provost Barney Crockett, Law said: 'It means everything to me.

'Thank you today to the Aberdeen City Council and the Denis Law Legacy Trust for this unbelievable moment.'

Law, named affectionately The King, unveiled the statue, featuring his finger pointing to the heavens and dedicated with the single word 'Legend'.