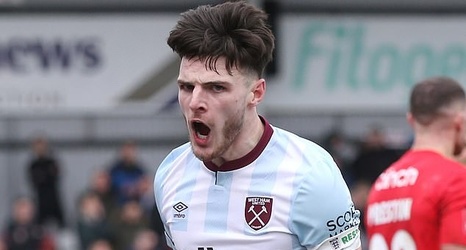 Rice, who is being heavily linked with moves to both Manchester United and boyhood club Chelsea, showed his leadership qualities at Kidderminster on Saturday to rescue his side from FA Cup humiliation.

The Hammers were trailing to Alex Penny's goal in stoppage time when Rice, on as a half-time substitute, drove into the penalty area and rifled in a dramatic equaliser to break Harriers hearts.

Moyes wants the 23-year-old to learn from his peers in the England squad and maybe one day wear the armband for both club and country.