Bruno Fernandes tells Jesse Lingard his biggest pre-match superstition, discusses feeling Mancunian and wanting to be at Manchester United for 'many years'... and questions Fred's taste in music after a win at Old Trafford! 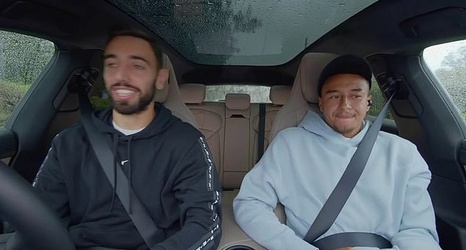 Bruno Fernandes admits he must drink a cappuccino at 11pm at night before a game - or the Manchester United star will have a sleepless night ahead of a fixture.

The Portuguese midfielder has started this season in promising form, with four Premier League goals in eight games since the start of the campaign.

In a conversation with fellow Red Devils star Jesse Lingard, Fernandes admitted that his pre-match coffee drinking is a vital superstition to help him prepare for games.

The 27-year-old told Lingard for the KFC YouTube channel: 'The day before the game, I always have to eat something in my (hotel) room.