Bruno Fernandes moans 'the standard of this club has to be higher and better' after MORE dropped points by Manchester United with draw to Leicester... with the Portugal star calling on his team-mates to take it 'game by game' in race for the top four 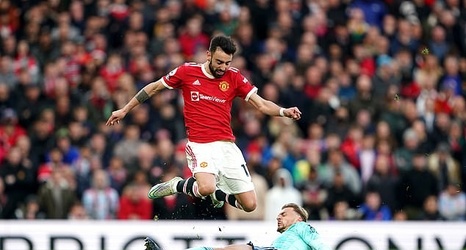 Bruno Fernandes called for Manchester United to raise their standards after a disappointing 1-1 draw against Leicester.

United's hopes of finishing in the Premier League top-four were dealt a setback at Old Trafford on Saturday although Fred struck to rescue a point after Kelechi Iheanacho had given Leicester the lead.

The Foxes might have walked away with all three points but the video assistant referee chalked off James Maddison's strike 10 minutes before full-time because of a foul in the build-up to the 'goal'.

United, though, were uninspiring without Cristiano Ronaldo, sidelined due to illness, with his fellow Portuguese Fernandes withering in his critique of their display as he called for sharp improvements.