Bastian Schweinsteiger claims Jose Mourinho exiled him at Man United because he 'played under Pep Guardiola' earlier in his career... and that Zlatan Ibrahimovic quit Old Trafford due to the Special One's style of play 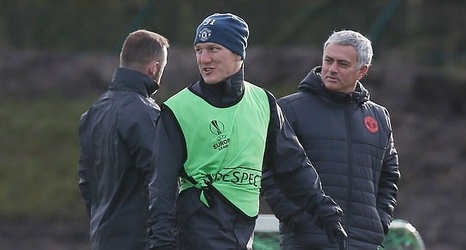 Bastian Schweinsteiger believes Jose Mourinho did not like him at Manchester United because he 'played under Pep Guardiola' and that Zlatan Ibrahimovic quit Old Trafford over the Special One's style of play.

The German midfielder was brought to Manchester by Louis van Gaal, who was sacked after one season of working with the Bayern Munich legend, with Mourinho installed as his replacement in 2016.

Mourinho immediately exiled Schweinsteiger at Old Trafford, with the German playing just four times under the Portuguese before sealing a move to MLS side Chicago Fire for the 2017 season.