Attacked by police after Eric Cantona was sent off, greeted at airport with 'Welcome to Hell' banners and being torn apart by a Tuncay hat-trick... Manchester United's trips to Istanbul always catch fire and next up is a meeting with new boys Basaksehir 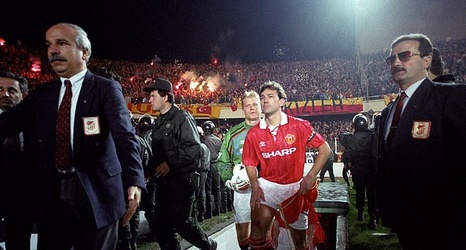 Manchester United are preparing for an eighth European night in Istanbul this week when Ole Gunnar Solskjaer's side face Istanbul Basaksehir and if history tells them anything, it will not be a trip for the faint-hearted.

Granted, this time round the stands will not be bursting at the seams with supporters, the famous wall of noise synonymous with games in Turkey gone.

Sir Alex Ferguson vowed 'never to return' to the city of Istanbul after a frightening night in 1993. Gary Pallister once described a European night in Istanbul as 'making Anfield look like a tea party'.