A beneficial week for United's Academy 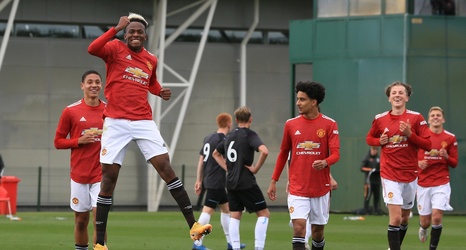 A youthful Under-23s side was beaten 5-3 by Liverpool last Friday, showing character towards the end of a difficult game, before Neil Ryan's Under-18s defeated Burnley 5-1 on the following day, at the Aon Training Complex.

In addition to an absorbing 0-0 draw, and subsequent penalty shoot-out success, at Rochdale in the EFL Trophy, there was also an Under-17s friendly against Mansfield Town at The Cliff.

Neil Wood's Under-23s faced Blackburn Rovers today (Friday), drawing 2-2, before a hectic eight-day spell finishes with the mini-Manchester derby at City for the Under-18s, which is live on MUTV.

“As far as weeks go in the Academy, this week is kind of a great example of being close to what a perfect week should look like,” Cox told us.