SEEING RED: VAR under the spotlight again after three 'extraordinary' calls... as Burnley and Leeds United are robbed while Southampton fume at 'definitely' wrong call against champions Man City 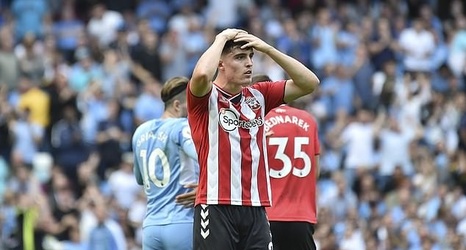 Referee’s use of VAR has come under renewed fire after a set of ‘extraordinary’ calls decided the fate of several Premier League games.

Manager Ralph Hasenhuttl questioned the decision to cancel a penalty for Southampton in their 0-0 draw with champions Manchester City.

Gary Lineker said the official Jon Moss was ‘definitely’ wrong to reverse the spot-kick and a red card for Kyle Walker in the same incident.

The referee Anthony Taylor overturned his decision to award Burnley a penalty in similar circumstances during their 1-0 defeat by Arsenal.