Now it's Neymar's turn for a 3/10! PSG star follows in Kylian Mbappe's first-leg footsteps with lowly L'Equipe rating in defeat at Manchester City - with French media labelling him an 'astonishing waste' who was 'crushed' by expectations on his shoulders 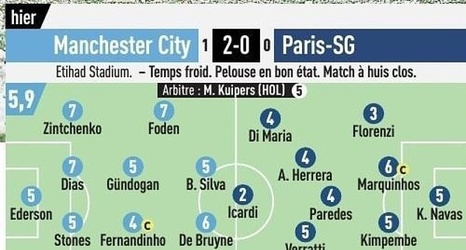 With Kylian Mbappe on the bench, the onus was on Neymar to provide the miracle PSG needed to go through to the Champions League final, but instead the team capitulated and the Brazilian was anonymous in his attempts to shine.

Mbappe was awarded a lowly 3/10 for his first-leg performance, and Neymar has now followed that up with his own 3/10 in the second leg at the Etihad, being slammed for his woeful display.