Mino Raiola HITS BACK at claims he has negotiated a £17m cut of a £154m Erling Haaland deal, after a staggering breakdown which included a £17m payment to the players' dad was reported in Spain following meetings with Real Madrid and Barcelona 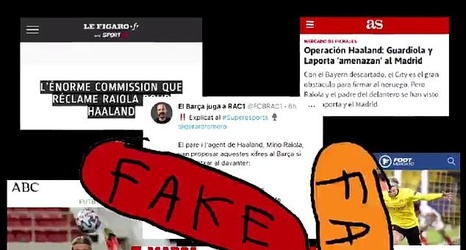 Erling Haaland's agent Mino Raiola has hit back at reports that suggested he had made an eye-watering list of demands for clubs looking to sign the striker.

Speculation over Haaland's future has intensified over the last week, after Raiola and Haaland's father Alfie were pictured in Barcelona ahead of holding talks with new club president Joan Laporta and the pair also travelled to Madrid together.

And it was reported in Spain that the super-agent had laid out his demands to any club interested in the 20-year-old.

It was claimed that he had insisted he would require £17m, as would Haaland's father Alfie, while the player himself was looking for a salary of more than £25m a year net.