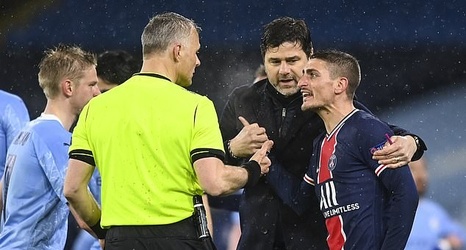 PSG midfielders Marco Verratti and Leandro Paredes have both claimed they were told to 'f*** off' by referee Bjorn Kuipers during their Champions League semi-final defeat by Manchester City.

Tensions flared during the crucial game at the Etihad with the stakes so high, and the Ligue 1 side imploded in the second half with Angel Di Maria shown a red card for a stamp on Fernandinho, with PSG stars involved in a few stand-offs with the official.

City won 4-1 on aggregate after Mahrez scored a brace to earn a 2-0 victory on the night and sent his side through to their first ever Champions League final.