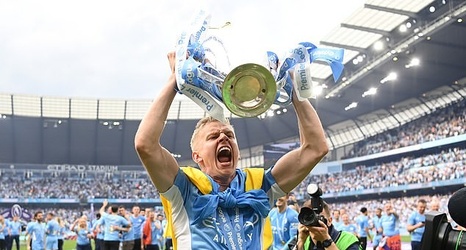 Manchester City have reportedly offered Oleksandr Zinchenko to Everton and Newcastle, unsure about the Ukrainian's long-term future at the Etihad.

Having already lured striker Erling Haaland from Borussia Dortmund this summer, the champions have now turned their attention to the left-back market and are linked with Brighton and Spain international Marc Cucurella.

A new left-back could spell the end for 25-year-old Zinchenko, who only managed 15 Premier League appearances last campaign - his lowest total for three seasons.

With his future at the club still in question, Manchester City have offered the Ukrainian to both Everton and Newcastle, according to The Athletic.