Manchester City starlet James McAtee is on a fast track for future success after receiving his first England Under-21 call up... before his first start for Premier League champions City 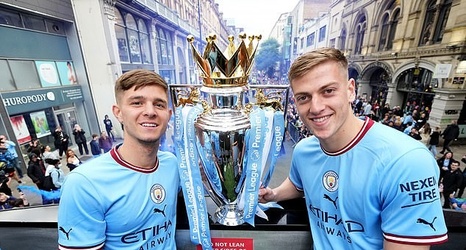 James McAtee has been handed a first England Under-21 call-up before making his full Manchester City debut.

Dubbed the “Salford Silva”, the 19-year-old midfielder has made six appearances for City across four competitions – including the Champions League.

But he is waiting for a maiden start under Pep Guardiola and England want to fast track the teenager’s progress on the international stage.

The skilfully technical McAtee, named Premier League 2 player of the season after a free-scoring campaign, is linking up with Lee Carsley’s squad at Mottram Hall ahead of Tuesday’s European Championship qualifier against Albania.