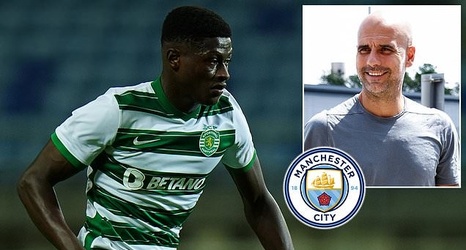 Manchester City are reportedly interested in landing Nuno Mendes this summer, but have balked at Sporting Lisbon's £43million price tag for the wonderkid.

The 19-year-old full back has impressed for the Portuguese champions, with his displays over 38 games in the top flight attracting interest from a host of European clubs.

Mendes' future has been in the air for some time, and Sporting's move for Wolves left back Ruben Vinagre has seen the 19-year-old rumoured to be making a summer exit amid strong links with City.

And according to Fabrizio Romano, City are interested in landing Mendes, who is viewed as a 'top left back for the future' by the Premier League champions.