Manchester City 'are waiting in the wings to make a move for Lionel Messi... with Pep Guardiola ready to swoop if the forward tells Barcelona he still wants to leave in the summer' as his contract continues to run down 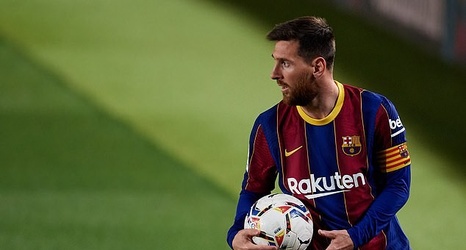 Manchester City are set to put themselves forward to sign Lionel Messi if he decides to leave current club Barcelona this summer.

His contract expires in 85 days' time at the end of the current campaign, meaning clubs outside Spain have been able to negotiate personal terms since January over a free transfer in the summer.

The Spanish giants are keen for their captain and talisman Messi to stay at the Nou Camp, with the Argentine forward yet to decide on his next course of action.

According to Marca, the prospective English champions are waiting on his final decision and will not step forward as a potential buyer until it becomes obvious the Argentine forward wants a move away.