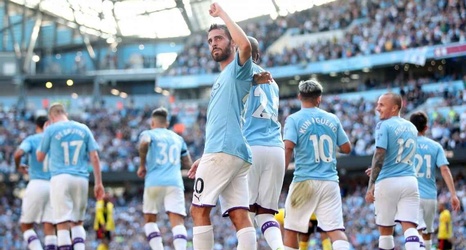 MANCHESTER, England -- It became a goal chase in the end and, but for a late miss by Kevin De Bruyne, Manchester City would have written another piece of history under Pep Guardiola by equalling Manchester United's Premier League record victory margin of 9-0.

United's record dates back to their 9-0 defeat of Ipswich Town at Old Trafford in March 1995, when Andy Cole scored five times that day for Sir Alex Ferguson's team. And when City went 7-0 ahead against Watford with 30 minutes still to play, the smart money was on Guardiola's all-stars erasing their neighbours from the record books rather than merely matching their achievement.