Man City boss Pep Guardiola hails 'funny guy' Erling Haaland and reveals the £53m forward IS ready to face Liverpool in the Community Shield... as he tips the Norwegian to form a lethal partnership with Julian Alvarez 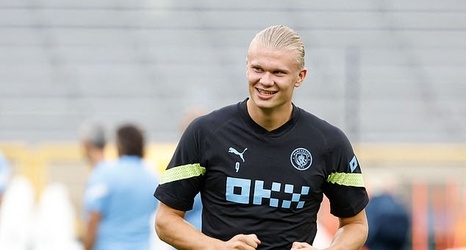 Pep Guardiola has described new signing Erling Haaland as a 'funny guy' but it will no laughing matter when the Norwegian is unleashed on Liverpool in today's Community Shield.

The 22-year-old striker made the £53million move to Manchester City this summer and is an instant hit with his new team-mates, becoming the joker in the pack among City's all-star squad.

The Spanish boss has hailed the striking sensation's arrival and is pleased he has settled in so well at the club.

'The first impression of him is really good, a funny guy.