Leicester 0-1 Manchester City: Bernardo Silva on target to secure visitors hard-fought three points at the King Power and keep them in touch with top spot... as the champions make it three wins in a row 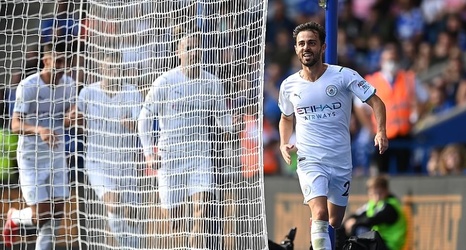 Manchester City are gathering momentum in their bid to defend their Premier League crown after they picked up a tight victory at Leicester, their third win in a row.

Bernardo Silva netted the only goal of the game just after the hour mark, tucking home beyond Kasper Schmeichel after a rebound fell kindly to him, allowing him to tuck in from close range.

The hosts, who have endured a mixed start to the new season, pushed forward late on in search of a leveller, but substitute Ademola Lookman was superb denied by Ederson, helping City to hold on for all three points.