Joe Cole hails Manchester City's 'unstoppable' centre-backs John Stones and Ruben Dias after the defensive duo earned Pep Guardiola's side victory over West Ham... with the ex-Hammers star hinting the pair could be as good as Rio Ferdinand and Nemanja Vid 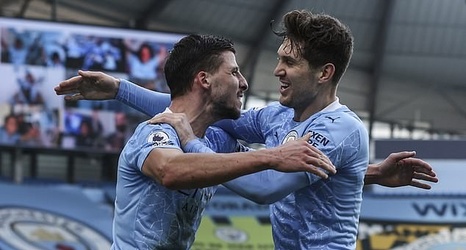 Dias headed home Kevin de Bruyne's brilliant cross in the first-half before Stones swept home Riyad Mahrez's ball in the second-half as Pep Guardiola's City moved 13 points clear at the top of the Premier League table for 24 hours at least.

The arrival of £51million defender Dias has not only boosted City's backline but the Portuguese international's partnership with Stones has given the England centre-back a new lease of life at the Etihad Stadium.