'I like it... if Messi scored two, he wanted three': Pep Guardiola brushes off Erling Haaland's annoyance at being subbed when on a hat-trick on his Premier League debut - after Man City striker described it a 's***’ 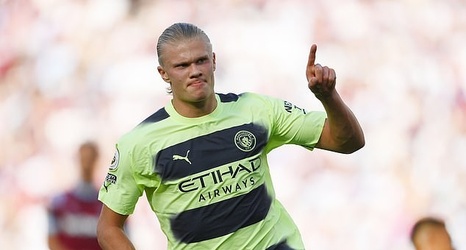 Erling Haaland’s one and only mistake yesterday was turning the airwaves blue, though his manager Pep Guardiola said he loved hearing Manchester City’s new No 9 curse his luck during his live television interview.

Discussing an Ilkay Gundogan cross he could have met for a Premier League debut hat-trick, Haaland said: 'I should have been there so a bit s*** but that's how it is.' Told to be steady with his language, the 22-year-old responded: 'Oh, sorry, s***, oh sorry!’

Guardiola later said it reminded him of Lionel Messi, saying a goalscorer is never satisfied when he could have scored more for his team.