'Everyone knows what claret and blue means to me': Jack Grealish gives Aston Villa fans hope he will stay while launching new home strip amid £100m interest from Manchester City... but supporters are split on whether England star will remain at Villa Park 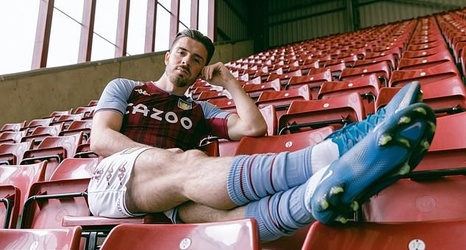 Aston Villa supporters have been given a boost heading into pre-season, with Jack Grealish hinting he could be ready to stay at the club.

The playmaker has been a starman for the Premier League side since their return to the top flight two years ago, and has since gone on to become a household name in Gareth Southgate's England squad too.

Despite rarely starting he has been seen as in integral part of England's set-up as they came within a penalty shootout of winning Euro 2020 on Sunday at Wembley.