Chelsea 2-1 Leicester: Blues in the driving seat for Champions League football as second-half goals from Jorginho and Antonio Rudiger move Thomas Tuchel's side above the Foxes and up into third with just one match left 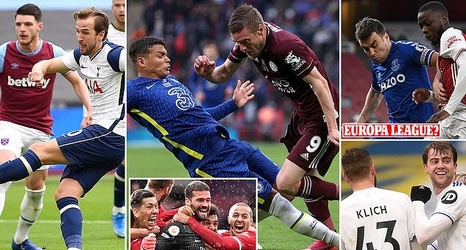 Chelsea dominated throughout and duly went ahead at the beginning of the second half through Antonio Rudiger before Jorginho then ever so coolly converted from the penalty spot in the 67th minute.

Kelechi Iheanacho set up a nerve-jangling finish after pulling one back for Leicester in the 76th minute but the Blues managed to hold on for what could prove a vital win come Sunday evening.

Chelsea have now moved up to third in the Premier League with just one match remaining, overtaking Leicester who sit fourth one point behind.