Bernardo Silva 'wants to LEAVE Manchester City this summer 12 months after Portugal star was left crestfallen when Barcelona move fell through... but Pep Guardiola is unwilling to let midfielder depart' 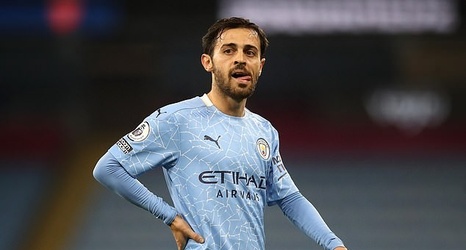 Bernardo Silva would like to leave Manchester City this summer despite recapturing his best form for the club last season, according to reports.

The 26-year-old scored five goals and laid on nine assists as City reclaimed the Premier League title and reached the Champions League final in 2020-21.

But in spite of his improved displays after a challenging 2019-20 campaign, The Athletic report the Portugal star is keen on leaving the Etihad Stadium this summer and pursuing a new adventure elsewhere.

The report claims Silva was left 'crestfallen' after a move to Barcelona hit a snag late on despite everything looking set to go through during last summer's transfer window.