What We Learned From LSU's 30-16 Loss To Alabama 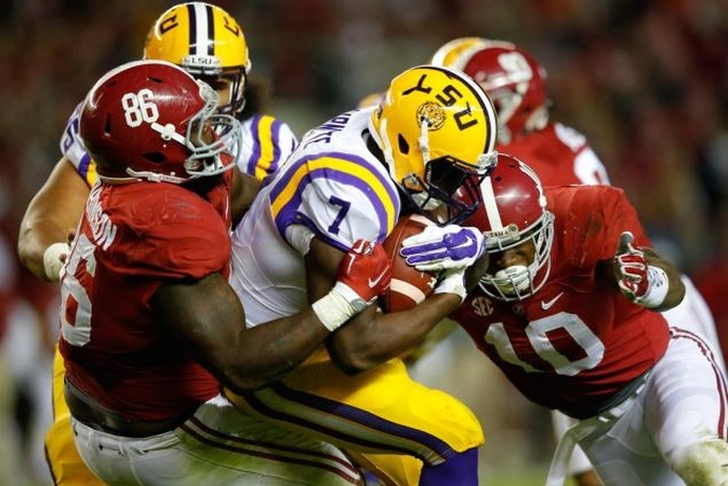 The LSU Tigers suffered a very disappointing 30-16 blow out loss to Alabama on Saturday, one that knocked them out of the top spot in the SEC West and out of the College Football Playoff picture (for now). Here are three things we learned about the Tigers in the game:

3) Brandon Harris is not ready for his close up

Harris had been playing well this season - to the point where some thought he was the best quarterback in the SEC - but his disastrous performance against Alabama certainly showed he has a LONG way to go. He completed just 6/19 passes for 128 yards, one touchdown, and one interception, though most of his completions came when he simply through the ball up for grabs. If LSU is going to take the next step, Harris needs to play much better.

2) Leonard Fournette can not do it all by himself

Fournette had risen to god-like status in college football because of his outstanding play this season, but yesterday reminded everyone that he was human. He only gained 31 yards on 19 carres against Alabama as he failed to receive virtually any blocking from his offensive line. Fournette was repeatedly tackled or facing pressure as soon as he got the handoff, giving him no chance of making something happen.

1) What in the world happened to that defense?

LSU had been able to rely on their stingy defense all season up until this point, but they were routinely gashed by Alabama, particularly on the ground. They allowed 434 total yards to the Tide - 250 of which came on the ground - and only forced six incompletions. This might simply be a bad game, but head coach Les Miles needs to fix this defense quickly if they want to get back into the playoff conversation.