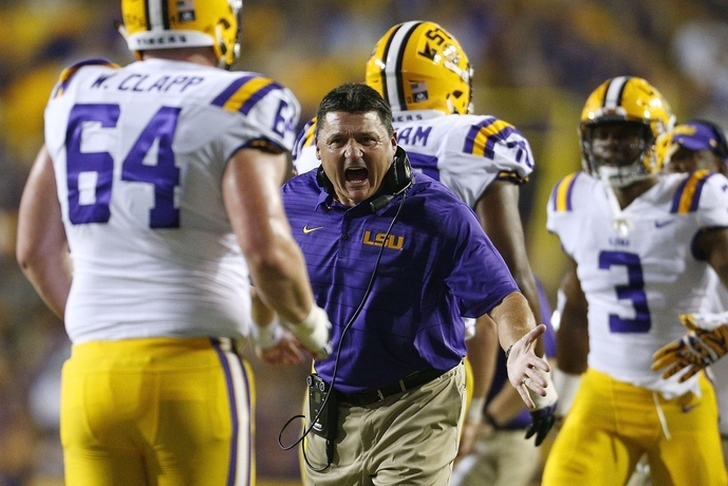 The LSU Tigers won't be playing in the College Football Playoff this season and won't be in a New Year's Six Bowl, but they'll still be in a solid bowl game. There's still a wide variety of options for them, but virtually all will be in the days leading up to New Year's Eve. So, who can they expect to play? Here are the 3 most likely bowl opponents for LSU this year.

NC State Wolfpack
There are four possible games in which the SEC and ACC could go against each other in the bowl season, and since both LSU and NC State finished with 6-2 conference records this season, there's a great chance they pair up. The Citrus Bowl, TaxSlayer Bowl, and Music City Bowl (most likely the TaxSlayer Bowl) could put them against each other.

Michigan Wolverines
Several games (Citrus Bowl, Outback Bowl, Music City Bowl, Texas Bowl) could pit the Big Ten against the SEC, which is where Michigan would likely come into play. They're also 8-4 and play a physical brand of football that would match up well with LSU. Plus, both schools have massive fan bases that travel well.

Notre Dame Fighting Irish
Notre Dame's loss to Stanford in the regular season finale essentially eliminated them from a New Year's Six bowl, but they'll still end up in a quality bowl game on New Year's Day. Several of those bowl games could pit them against SEC teams - the same bowl games (Citrus Bowl, Outback Bowl) that LSU could be selected for. Watching two programs of this magnitude going up against each other would be beneficial to both teams.

Follow our LSU Tigers page for all the latest LSU football news!