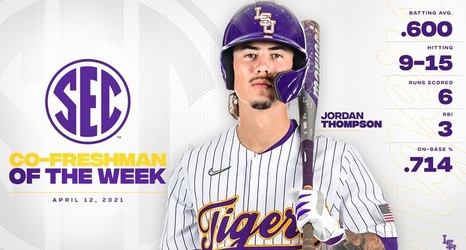 BATON ROUGE, La. – LSU shortstop Jordan Thompson was named by the Southeastern Conference Monday as the SEC Co-Freshman of the Week. The honor marked the second time this season Thompson has received the weekly award.

Thompson also walked once in the Kentucky series and was hit by a pitch, posting an on-base percentage of .